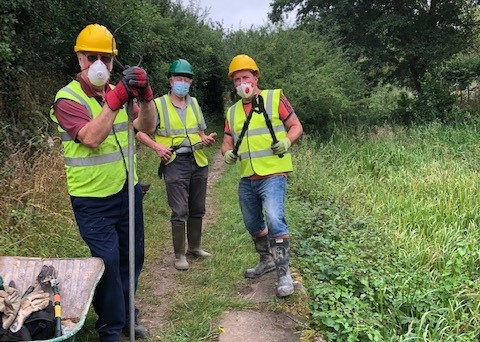 The Shropshire Union Canal Society started work at the beginning of August on clearing the vegetation on the next dry section of the Montgomery Canal at Crickheath in Shropshire.

This clearance marks a milestone in the recent restoration work as it sees work on a section south of the current restoration efforts and it will facilitate the inspection of the canal bed and walls at Crickheath Wharf to assess remedial work needed.

A tramway from Porth-y-Waen was built probably around 1820 to bring limestone stone from the quarry there to Crickheath wharf for transhipment to the lime kilns along the canal. Very little remains of the tramway but some of the rails still exist in the gardens of the cottages at the wharf.

While rebuilding the wharf wall about 20 years ago Waterway Recovery Group volunteers unearthed bits of a boat which Jack Roberts* in his autobiography remembers seeing sunk at the wharf*.

His father told him it was the Usk, a Trench boat, narrow enough to go up the tub boat locks to the bottom of the incline plane near Wellington. The story was that a boatman had been decapitated on this boat whilst working under the guillotine gates of this branch and it was thereafter regarded as somewhat jinxed. It ended up as a privately owned coal boat on the Montgomery and finally “the worse for wear, it was placed to sink at the point mentioned, and the remains it are still there” Jack wrote in 1969.

Most of the boat has either been taken for scrap or bulldozed but some of the bow still remains, reburied and untouched, and it could be excavated more fully and carefully in the future. Perhaps SUCS will find the rest when restoring the bed of the canal in the next few years.