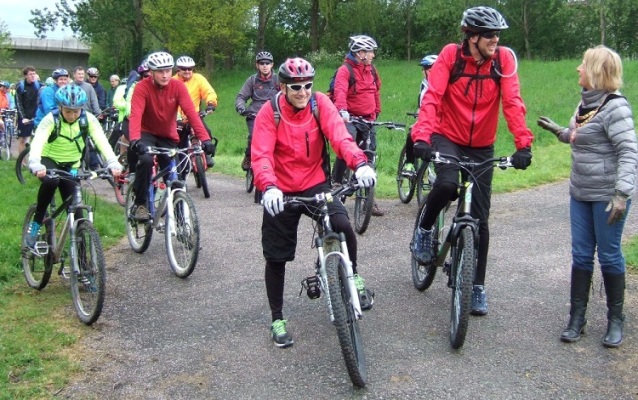 As England and Wales emerge from lockdown, plans are being made for this year’s Montgomery Canal Triathlon with arrangements to mitigate coronavirus risks for all involved, on a later date, Saturday 4th September.

Until Covid-19 struck the event had taken place for eight years with entrants from across England and Wales – and further afield – travelling the 35-mile canal by bike, on foot and in canoes. The popular Triathlon raises funds for the restoration of the Montgomery Canal.

The last Triathlon in 2019 featured in the BBC TV series Gareth Edwards’ Great Welsh Adventure when Sir Gareth and Maureen Edwards started the event at Newtown and then joined the participants at other stages later in the day.

This year restoration works in the Crickheath area mean that the towpath is closed between bridges 84 and 85. With no suitable alternative route this year’s Triathlon will be modified so entrants starting at Newtown will cycle about 11½ miles to the picturesque Belan Locks. Then, reversing the previous order, the next section will be by canoe to Crowther Hall Lock, Pool Quay (about 5½ miles) with the final section of about 9½ miles on foot to finish at Bridge 86, just before the towpath closure.

Christine Palin, Chairman of the Friends of the Montgomery Canal said, “We had hoped that after losing last year’s Triathlon we could run the event again this spring and we had set the date for 4 May. Unfortunately, the continued spread of the coronavirus and ongoing uncertainty about restrictions led us to take the difficult decision to postpone the event.

“We have spent some time now watching the changing restrictions and have concluded that although there are concerns regarding Covid issues, there is nothing that cannot be overcome in some way so we can go ahead with the event on 4 September unless Government guidance changes.

“We have also been faced with the long-running towpath closure in the Crickheath area. The Shropshire Union Canal Society have been working hard to catch up with time lost under lockdown on their project to reconstruct the canal to the restored Crickheath Basin. They have faced considerable subsidence on this length and restoration here means the towpath may still be closed on our triathlon date. We have therefore changed the arrangements for this year with cycling, canoeing and walking in different order and for a shorter distance – though at just over the length of a standard marathon this ‘Marathon Triathlon’ remains a challenging event.

“Our finishing point is Schoolhouse Bridge, Bridge 85, the last highway blockage in Shropshire. The restoration project for this bridge has involved a joint team of the Friends of the Montgomery Canal, Shropshire Union Canal Society and the Inland Waterways Association raising funds to rebuild the bridge. A team of volunteers has been designing the new bridge and arranging all the necessary approvals and agreements – this has been taking longer than we had hoped, but closing a highway to rebuild a road bridge in a matter of months is a challenging project.

“Many entrants deferred their entries from last year, so if it had been possible to run the event in May we expected to have to limit places to those who had carried their bookings forward. At this stage we cannot be clear what the situation may be in September so at the moment we can’t definitely confirm that the event will go ahead or how many may be able to take part, so we shall not be taking bookings at present. However, we are inviting anyone who would be interested in taking part if we should have the capacity to let us know at triathlon@themontgomerycanal.org.uk so we can get in touch as the situation develops.

“The Montgomery Canal Triathlon is popular with families and the more seriously competitive and we hope that the decision to delay to the autumn may mean that more can take part. Anyone joining the event, or following people who are, will see rebuilt bridges, established canalside nature reserves and restored lengths of canal as well as bridge blockages and unnavigable sections that still have to be reopened.