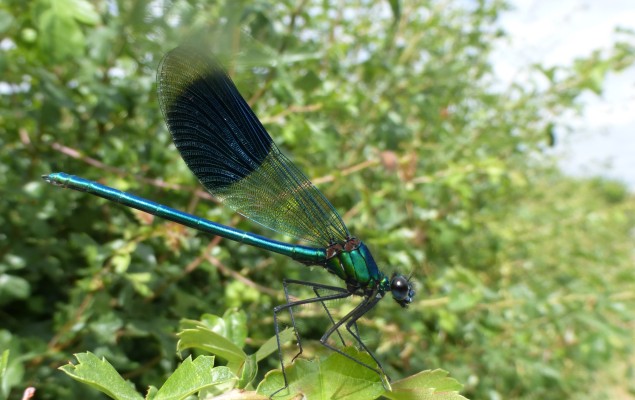 At any time of the year, the Montgomery Canal is wonderfully rich in a wide diversity of wildlife species.

Much of the canal has Site of Special Scientific Interest (SSSI) status, and the Welsh section is of international importance, and has been designated a European Special Area of Conservation (SAC) for its aquatic plants. For example, the Monty is home to the most extensive population of the rare floating water-plantain (Luronium natans) in the whole of Britain.

There are currently seven ‘offline’ nature reserves along the length of the canal. Three of these reserves, Aston Locks, Rednal Basin and Weston Arm, are along the English length. Another four can be found along the Welsh length: Wern Clay Pits, Guilsfield Arm, Whitehouse and Brithdir nature reserves. Whilst each reserve has its own character and distinctive flora and fauna, they share a common value in helping to conserve the valuable aquatic, woodland, grassland and scrub habitats associated with the canal corridor.

But the canal itself is of course also rich in wildlife, and walking or cycling along the towpath is an excellent way to experience the wealth of plants, birds, insects, mammals, amphibians, fish, fungi and other canal specialists which thrive in this environment.
At any time of year, there is much to delight any nature-lover, and each season has its associated highlights.

In early spring, coltsfoot flowers can be seen in bloom, sometimes even in the snow. They are closely followed by celandines, primroses and violets, and in some places cowslips, which all add to the feeling of joy at the prospect of what the following weeks and months will reveal.

Spring is also a time of birdsong – song thrushes, blackbirds, robins and wrens proclaiming territories, closely followed by the warblers – chiffchaff, willow warbler, sedge warbler and whitethroat. The first of the swallows arrive, and feast on the insects above and alongside the canal. Water birds are starting to nest, and mute swans, mallard and moorhen can often be seen collecting nest material or sitting on their clutch of eggs.

Early butterflies are on the wing, and orange-tips visit the delicate mauve lady’s smock, or cuckoo flower, which often borders the canal, in order to lay their eggs.

In late spring and early summer, new bird families take to the water, with cygnets and mallard ducklings always a popular sight. Warm days see the emergence of clouds of damselflies, with the large red and several ‘blues’ bringing a welcome dash of colour, and the metallic demoiselles presenting a dazzling spectacle. Larger hawker dragonflies patrol their territories above the water, and the emperor, Britain’s largest dragonfly, performs its seemingly unending flight well above the surface of the canal. Harmless grass snakes may be found in the long grass at the towpath edge, or spotted gliding into the water where they are quite at home.

A colourful floral ribbon stretches alongside the towpath, with yellow flag, red-brown water figwort, pretty blue skullcap, purple-dotted gipsywort, pinkish-red hemp agrimony, frothy cream meadowsweet and a host of grasses, rushes and sedges to name but a few of the waterside plants. Some offline reserves also support more unusual plants such as early purple and common spotted orchids, or broad-leaved helleborine. Water plants, too, are in flower, with two of our rarer aquatic plants, floating water-plantain and frogbit each sporting pretty 3-petalled white flowers. The much larger flowers of native yellow water-lilies can create extensive floating carpets of gold at this time of year.

As autumn approaches, the hedges alongside the towpath take on colours of their own, with every shade of yellow through orange and red to brown, as the leaves turn, and the hips, haws and berries festoon this important canal-side living corridor. Hazel nuts, blackberries and sloes are feasted on by squirrels and birds, and the fluffy seedheads of bulrushes release their tiny parachutes at the slightest hint of a breeze.

Fungi are associated with autumn, but many are just as visible in winter, and scarlet elf-cup is one such beauty, growing on fallen twigs and branches in shady damp places including the offline reserve at Wern Clay Pits. Its bright red cups brighten up even the darkest winter’s day.

Once the colder winter weather sets in, redwings and fieldfares, winter visitors to the UK, can be seen feasting on hawthorn berries, and if there is snow on the ground, there may well be tracks to follow or identify, left by both birds and mammals. Herons and grey wagtails are often more obvious in the winter, and blend in well with the rather monochrome landscape.

Throughout the year there is the possibility of seeing something particularly special. For many this might be the unmistakeable blue and orange flash of a kingfisher; or perhaps the tell-tale line of bubbles left by a secretive otter, or its ‘not unpleasantly scented’ spraint beneath a bridge.

There are many surprises to discover too – rare freshwater sponges can be seen attached to surfaces such as lock gates and bridge walls, and legally protected white-clawed crayfish take refuge in the submerged crevices of these structures. In October 2017, the harsh screech of a bird high up in an oak beside the canal on the Wern, was emitted by a ring-necked parakeet – not generally associated with the canal environment, but living proof that almost anything can turn up along the Monty.