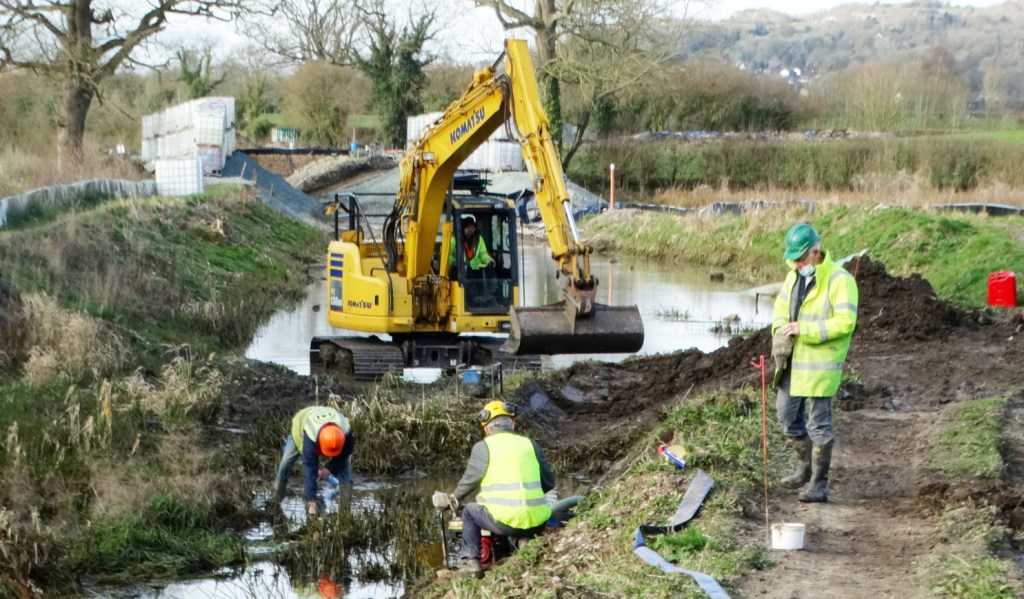 Shropshire Union Canal Society volunteers resumed work in March, continuing the restoration of the 330 metre dry section of the Montgomery Canal, at Crickheath.

When finished, this section of the Montgomery Canal will link the national network of canals, to the winding hole at Crickheath, which is already in water.

The monumental task, just before Christmas, of substantially overbuilding an area of subsidence affecting both sides of banking in the middle of the section, was completed.

A massive pumping out programme ran throughout the week end to remove thousands of gallons of rain and ground water, so that machines could operate at both ends of the project.

The emphasis has now shifted to preparing a smaller section of the channel, next to Crickheath winding hole, which has also suffered from subsidence, in readiness for remedial treatment.

Other tasks were undertaken, in what proved to be a very successful session.

The very sloppy bed of the channel at the end near Pryce’s Bridge, which has been dubbed, ‘The Hell Hole’ was levelled off and stabilized with grouting material, as preliminary work, towards shaping the channel, in readiness for lining with layers of waterproofing materials, and blocks, in the summer.

Another team was involved in removing unwanted sections of newt fencing, installing new sections to cope with boundary changes and repairing damaged parts.

To compensate for time lost due to Covid-19 restrictions, there will now be two work parties per month until Christmas.

Further on down the canal towards Llanymynech, another restoration group, Restore The Montgomery, are hopeful of beginning work on installing a new road bridge near School House in Long Lane in the coming months.